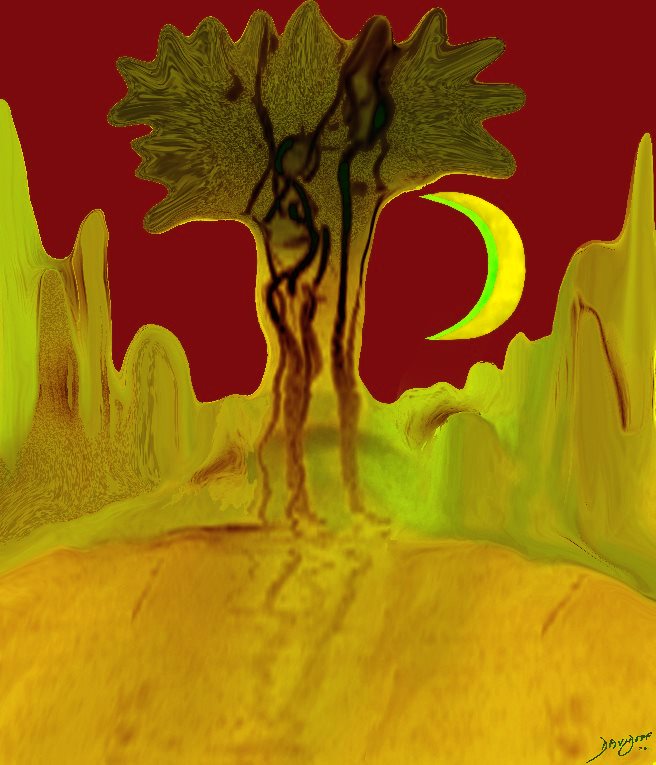 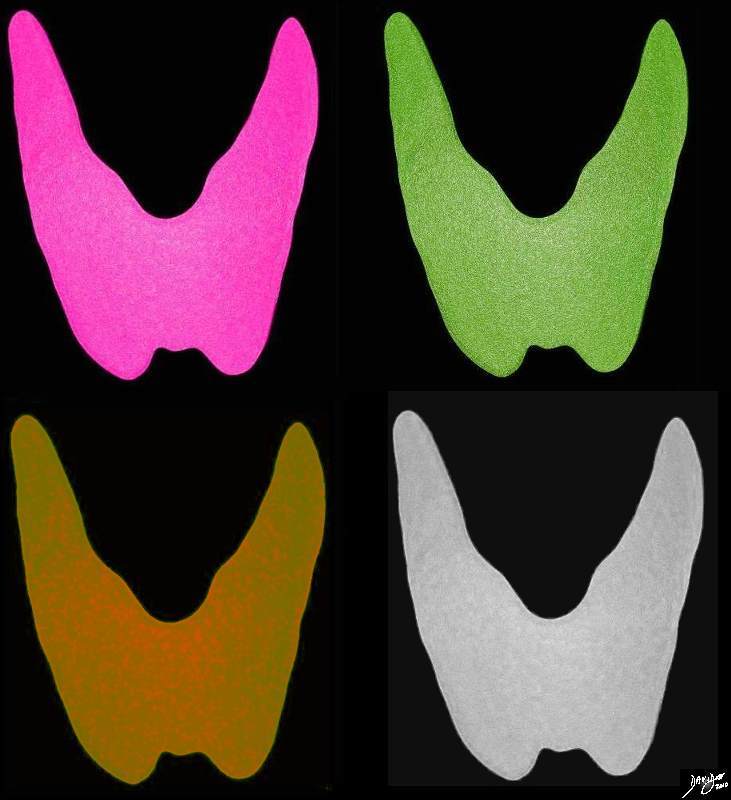 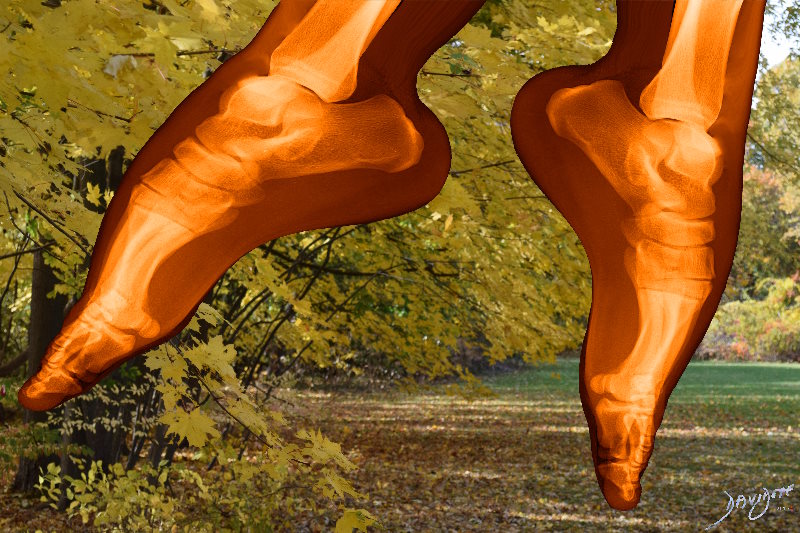 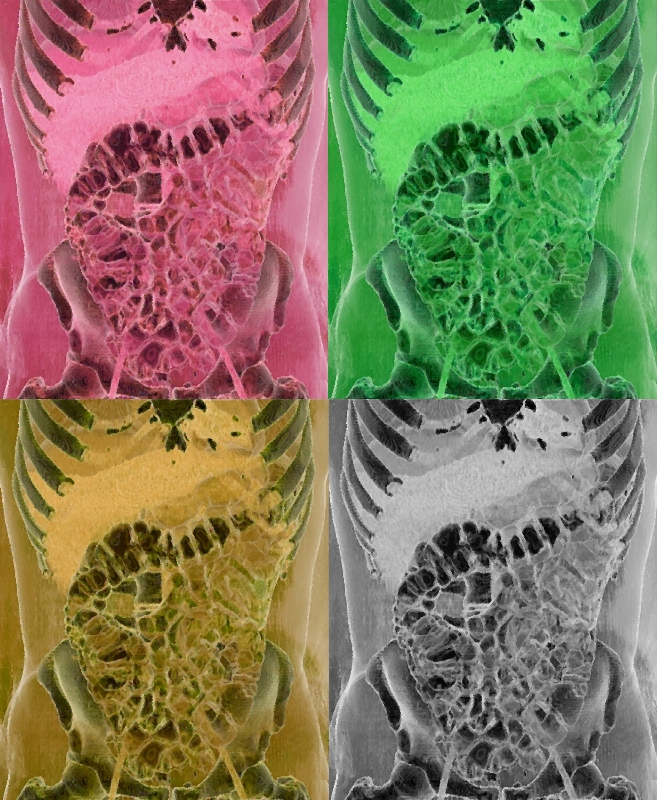 Four Seasons in The Abdomen shows an exposed abdominal cavity created by 3D reconstruction of a CT scan. The many organs of the abdomen come together to build the digestive system and genitourinary system with their connections to the rest of the body via the vascular lymphatic and nervous system. The scene is shown in the bright pink of Spring, the refreshing greens of summer, the mellow colors of fall and the bleak grays of winter. 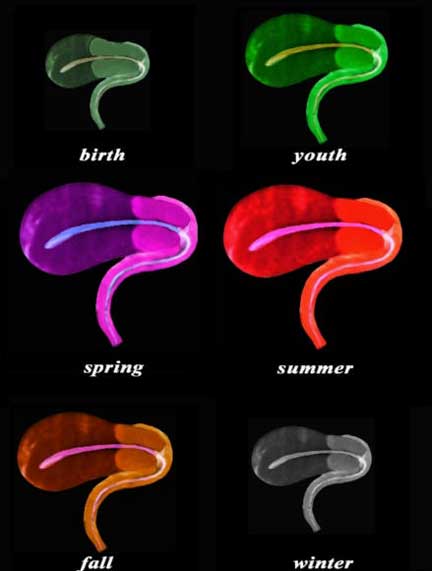 Seasons of the Uterus and Size Changes The sagittal diagram of the uterus and vagina through time shows an anteverted uterus at birth, through youth as it slowly matures and enlarges, entering spring as it reaches maturity, summer time when it bears fruit, and then through fall as it starts to involute in the postmenopausal period, and finally in its winter when it shrivels. In this view the uterus, vagina, and the internal cavity starting in the endometrial cavity, coursing through the cervix and then into the collapsed vaginal cavity is exemplified.  Images courtesy of: Ashley Davidoff, M.D. 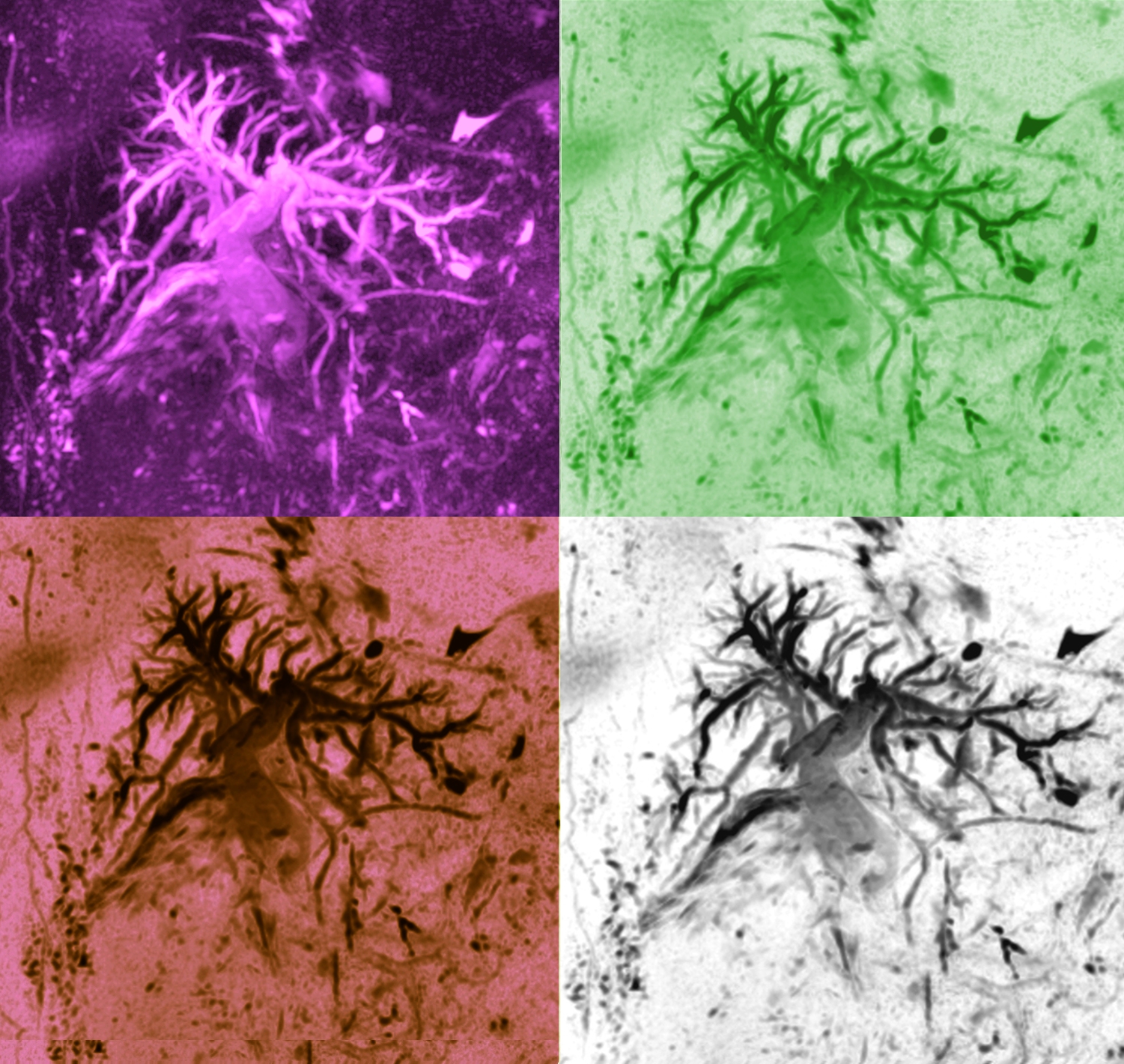 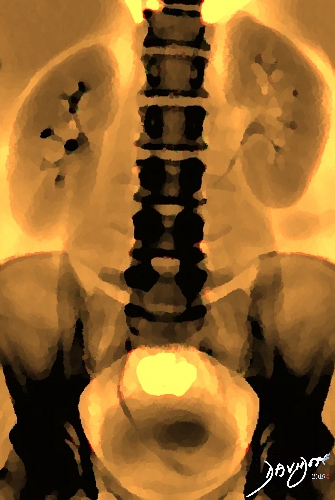 KUB, Kidneys, Ureters, and Bladder in the Fall “Kidneys, Ureters, and Bladder in the Fall” is abdominal X-ray of the abdomen after contrast injection shows the kidneys, calyces, renal pelvis, ureters and urinary bladder. The orange hue softens the classical black and white X-ray, but is in contrast to obvious skeletal structures, including the lumbar spine, and pelvic bones. The orange color also has a seasonal feel of the autumn and hence the title. by Ashley Davidoff MD 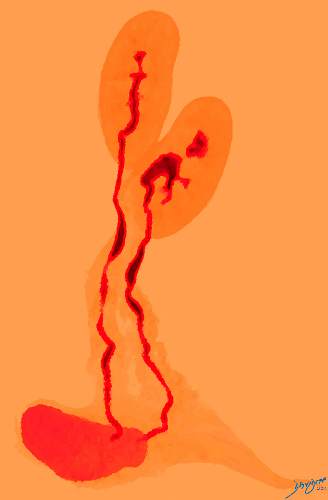 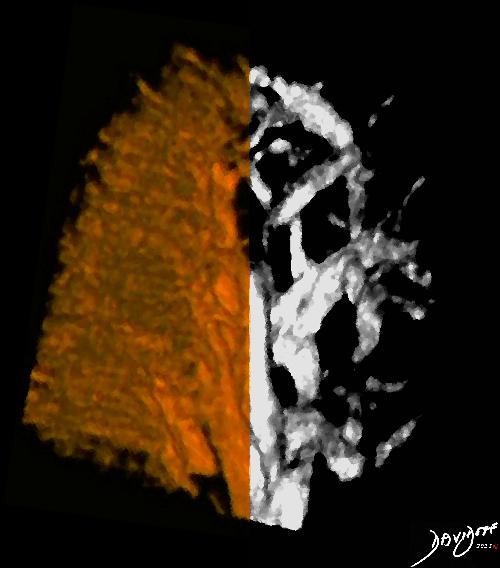 Time for the Fall Time for the Winter This art piece teaches us the unpredictability of fate and time .The power Doppler ultrasound of the kidneys shows a variation of the renal vasculature. On the left side the vascular system is abundant, while on the right side, just the skeleton of the veins is demonstrated. The artist saw this image as an opportunity to explore concepts such as opposites, abundance, paucity, situational changes, time, and life lessons. Relevant quotes include “Make Hay while the Sun Shines” and “Time for Every Every Season” . Artistically a sharp line differentiates the left side from the right. This abrupt change from the one season to the next infers unpredictable, and fateful situational change in life. In this case -there is a seasonal change, but the situation could just as easily reflect an abrupt change with the arrival of a devastating disease on the doorstep of life. by Ashley Davidoff MD 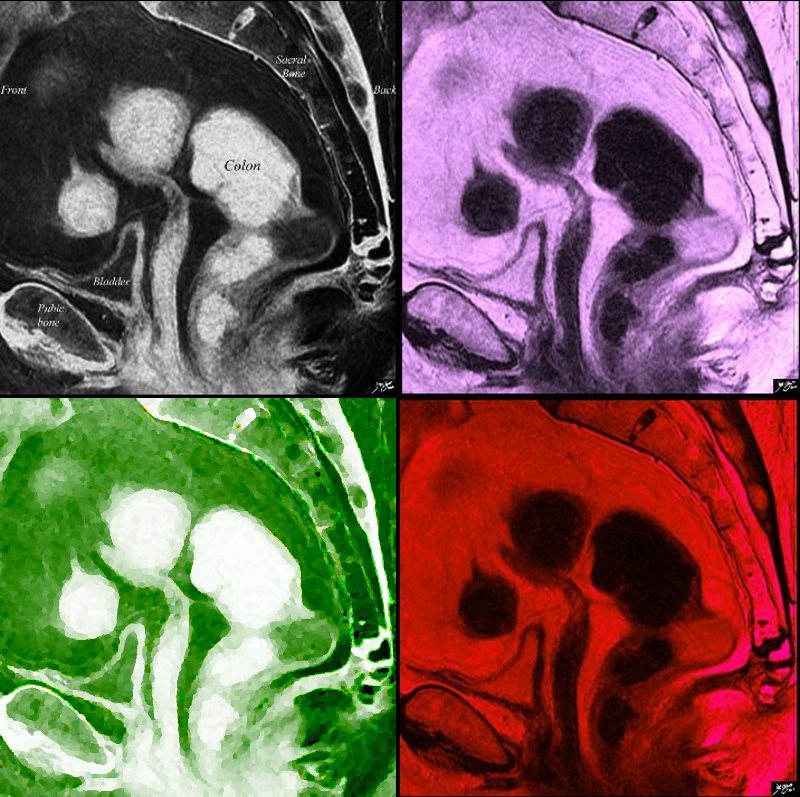 Seasons in the Pelvis with Flowering Trees in the Colon on MRI This AiA rendering is derived from a T2 weighted MRI image of the pelvis in the sagittal plane. The image shows a variety of structures including the rectum, bladder, sacrum and pubic bone. Rectal contents when digitally rendered take the form of flowers and trees in a garden or flowers in a vase. The group of 4 images represent seasons of the pelvis. The top left image in in black and white represents snow and the winter, the top right deep pink image represents the blossoms of spring, , the bottom left green image represents the trees of summer, the bottom right orange image represents the changing colors of the fall. Ashley Davidoff MD 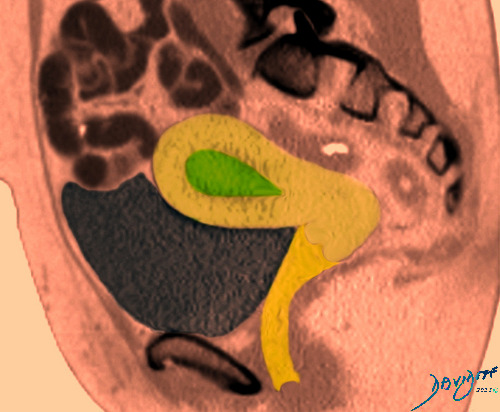 Uterus Resting on the Bladder The sagittal reconstruction of a CT scans shows the uterus (yellow) with endometrium (green) a resting on the partially filled bladder (dark brown). The sacrum is seen posteriorly and small bowel anteriorly Artistically the colors of the image portray a fall like mood. Ashley Davidoff MD 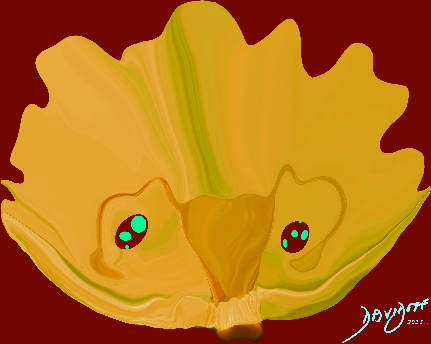 Uterus, Fallopian Tubes, Ovaries, and the Peritoneal Cavity in Yellow The uterus is draped in peritoneum but invaginates it’s body into the centre of the pelvis just like the central portion of the flower which contains the pistil (stigma, style and ovary) and stamen (anthers and filaments). The peritoneal cavity or coelomic cavity is a large cell lined space via which almost all the abdominal organs are connected . It may be considered the suburban space around which the houses of the town are positioned. The ova are released from the ovary into the space, but they are quickly directed by the fimbriae into the Fallopian tubes. by Ashley Davidoff MD