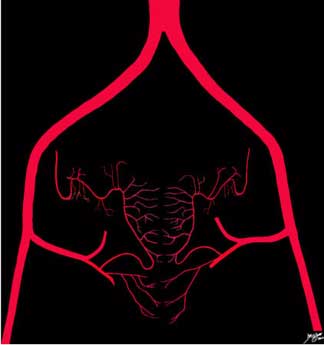 Blood Supply  The blood supply to the uterus is from the uterine arteries, which take their origin from the iliac system. The uterine artery collateralizes with the ovarian artery and there are also rich anastomoses between the left and right sides, both anterior to and posterior to the uterus. Ashley Davidoff, M.D. 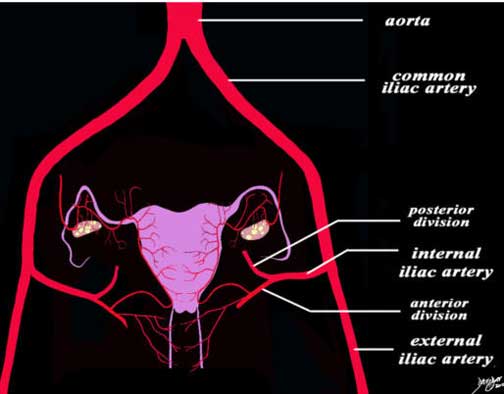 Blood Supply The diagram of the blood supply to the uterus in its most basic form shows that the uterine artery is a branch of the anterior branch of the internal iliac artery and the uterine artery collateralizes and in fact is continuous with the ovarian artery which takes its origin directly from the abdominal aorta. The main branches include the uterine branches, vaginal branches and the ovarian branches. Ashley Davidoff, M.D.

Spiral Arteries, Stratum Functionalis and Menstruation In this 26-year-old premenstrual female a transvaginal ultrasound reveals a normal transverse view of the uterus with characteristic premenstrual appearance (a). The stripe is homogeneously echogenic and thick but also shows a hypoechoic halo of the junctional zone or inner myometrium (salmon). The homogeneous stripe is made up of two histological layers (not distinguished by this ultrasound): the inner stratum functionalis (deep orange) that will shed once the spiral arteries vasoconstrict and the outer stratum basalis (deep yellow) that will not shed and will be the basis for regenerating the endometrium in the next cycle. The next layer as stated above is the compact myometrium – the junctional zone (aka inner myometrium) and is followed by the thicker outer myometrium (maroon) (b). In the second series of images (c, d) the blood supply of the uterus is exemplified to demonstrate the branches that lead to the spiral arteries which undergo vasoconstriction at the time of the menses, resulting in ischemia of the functionalis and subsequent shedding . The uterine arteries give rise to the arcuate arteries which in turn give rise to the radial arteries, straight arteries and finally the spiral arteries. Ashley Davidoff MD 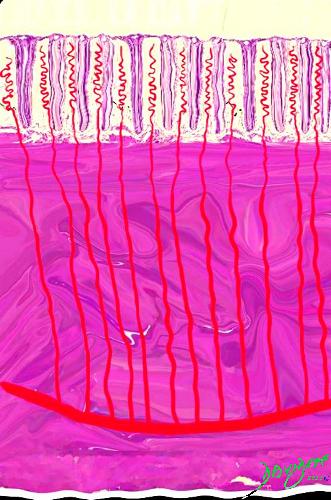